For a recent project I had to do a basic forensic investigation of a hard drive. The assignment included two questions :

I want to share the steps that I took to do basic forensics on a cloned disk image. This is not an in-depth forensic investigation but it was enough for this assignment.

Note that taking into consideration that the original evidence was already contaminated by a prior research, the steps taken were enough for providing “clean evidence”.

The device to investigate was a Windows 7 installation on a Lenevo laptop with a Seagate 320GB hard drive.

I disconnected the hard drive and removed it from the laptop.

I used two (one master and one working copy) external storage devices for storing all the investigation details.

I connected the hard drive to a laptop running a fresh install of Ubuntu Linux 14.04.2 LTS. I disabled the auto-mount options. This has been described on the Ubuntu wiki. Disabling auto-mounting is necessary to make sure that nothing changes on the original disk. Ideally you use a write-blocker to accomplish this but for this investigation using the read-only option with no mounting on Linux was enough.

The external hard drive showed up as device /dev/sdc. I wanted to create a full disk image, including all the available partitions.

As a first step, for documentation purposes, I listed the disk layout with fdisk.

Print out the layout with the p option.

This shows that the Windows hard drive has two partitions, the boot (/dev/sdc1) and the system (/dev/sdc2) partition.

The easiest way to create full disk images with Linux is with dd.

The options of dd are

This resulted in a full disk image, containing both partitions : boot and system (including the data).

In order to guarantee the integrity of the image I made a hash of the image, both with MD5 and SHA1.

Creating a hash of the image file allows you to check in the future that nothing has changed in the original image, preserving the original evidence.

All of this gave me a full forensic clone of the drive image, available under /storage/sdc.dd.

Now that the full disk image was ready I had to examine it. The majority of the tools available for examining a disk image run on Windows. So I installed a fresh Windows 7 virtual machine and had the dd disk image available via a file share (z:).

One of the easiest tools available to read disk images is FTK Imager. You can use the freely available download of FTK Imager from the website of Access Data.

With FTK Imager you point it to a disk image and then mount the available drives. In this case it resulted in (Windows) having drive E: and F: available (in read-only modus) for further research. For the remainder of this post :

Via FTK Imager you can investigate the files available on the disk but also those that have been deleted (via ‘Unallocated Clusters’) or backed up (in the ‘Volume Shadow Copies’).

This investigation focused on a domain user. If you happen to have to do an investigation on a local user it makes sense to document the different user details that you can find in the registry hives.

You can then use FTK Registry Viewer to list the user details. 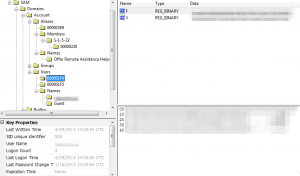 The first question of the request was to detect if there were any viruses on the system. I used the free version of Avira to scan both the E: and F: device.

The scan via Avira returned a number of possible viruses. I then used Panda Free Antivirus to double check these results. Both scan results had more or less the same hits.

Once the files were exported I used the hashes of the files and searched VirusTotal to check the behavior of these files. All files detected by the virusscanners were already previously analyised by VirusTotal. The findings of the two virusscans together with the results from VirusTotal provide a good insight on the nature and impact of the found viruses.

The details from these three sources provided me enough data to answer the first question and backup the answer with proof from the AV- and VT-reports.

The second question was to check if the surf behavior of a user corresponded with a given policy.

The surf history is available in a number of places (in both deleted and non-deleted files) and depends on the browser being used. Instead of carving all the different files manually I decided to use a tool to do this. I used a trial version of Internet Evidence Finder from Magnetic Forensics. IEF is available as a one month trial version. The trial is great to explore the different features but if you’re going to use it for business purposes you should request a quote.

Within IEF, I enabled all the web-related and operating-system related plugins. This allows you to search for the necessary evidence concerning the ‘web-browsing’. Note that IEF has also plugins for other searches (Skype, Facebook, listing users, P2P, will also reveal other (Skype, Facebook, …).

The first step in IEF requires you to point it to a source. I choose to have it analyze the dd disk image. Because IEF was running in a VM and the disk image was mounted on external storage the analyze process took quite a while.

Once the process is done you have to open the report viewer to see the results. Because IEF reads all the files that were made available via FTK Imager it analyzes both the files normally available on the disk and the deleted files (available via the ‘Unallocated Space’).

For example in the screenshot below you see a record of a visit to Facebook that has been found in the unallocated clusters (meaning the ‘deleted files’).

IEF returns a database of information found in the different files and a timeline of what happened. The timeline shows you the different actions of the user over time. This is based on different resources like for example the Windows Event Log, the cookies found, the Google Analytics cookies and all other relevant files. Not that this also includes deleted files and files in the Volume Shadow Copies. 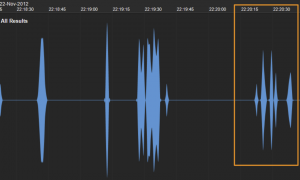 Via IEF I was able to extract the websites that were visited (based on cookies, IE history and Google Analitycs cookies). It allowed me to get a list of web visits per certain category. Combining this information with the timeline gave me the opportunity to reconstruct the web surfing behavior and provide an answer to the second question of the request. I was able to backup the answer with proof by exporting the files that contained the proof (cookies, etc.) via FTK Imager and by exporting the results (in CSV format) from IEF.

Combining the timeline feature with other events allows you to reconstruct in detail what happened prior or after a given timestamp. This is great if you to find out for example what possible visit to a website caused a virus infection.

In an earlier stage I detected the presence of a virus infected file. According to the information from VirusTotal this virus exploited a vulnerability in Java (CVE-2012-1723). With FTK Imager it was possible to detect the “last modified date” (for this case it was in the DOS format field). I then used IEF to zoom in on the actions that happened just before that timestamp. According to the data found in Google Analytics Referral I found out that the user did a search via Yahoo. The same timestamp then showed, via Google Analytics Session and Google Analytics First Visit a visit to a website from the search results. This was confirmed with the timestamp when the cookie was set in the Internet Explorer Cookie database. A couple of seconds after the creation of the cookie the timeline revealed entries in the Windows Event Log. These entries describe how java.exe was started.

I reconstructed the event time line as follows :

These series of events make it very likely that the virus was installed by visiting one of the sites from the search results.

Note that some of these entries (espc. the Google Analytics cookies) were found in the Volume Shadow Copies. This shows you that you have to look in every information resources available.

If you want to learn more about extracting information from Google Analytics cookies then you should definitely read the blog posting Carving for Cookies: Supersize your Internet History Timeline using Google Analytic Artifacts.

This project gave me a short insight in doing a basic forensic research and provide an answer on two simple questions. In short I followed these steps