Cobalt Strike (S0154) is a commercial penetration testing platform which is used by many red teams and, unfortunately, also by many criminal threat actors. In this post I summarise the findings from a SANS Digital Forensics and Incident Response keynote by Chad Tilbury : Cobalt Strike Threat Hunting. The YouTube video provides much more details but below you can find those findings that were relevant for me during an IR case.

This post includes references to commands of the Volatility memory forensics platform but you can use any platform of your choice. Some of the logs sources that are valuable during IR such as network traffic (detect beaconing, traffic frequency), PowerShell logs and Sysmon logs were unfortunately not available.

Look at running processes and the process tree via pstree. Two anomalies to look for are:

Rundll32.exe is spawned as a sacrificial process in which Cobalt Strike injects its malicious code. By default, Cobalt Strike will spawn rundll32.exe. This is customisable and can as well be svchost.exe or any other process. The take-away is to look for multiple, similar, processes all spawned from PowerShell.

The next item to look for are the command line arguments that are used for starting rundll32.exe from PowerShell.

Review if a 32-bit version of PowerShell was used to launch the subprocesses. You can detect this by looking at the startup path (via cmdline) of the command. If it includes syswow64 (take note of different forms of capitalisation) then it’s using the 32-bit version.

You can find injected code with malfind which allows you to find ‘hidden’ or injected DLLs in user memory. Pay special attention to the memory pages that are marked both as executable and writable. Don’t be confused if the first page only contains zeros. Cobalt Strike can will not inject its code in the first page but you’ll be able to find the injected code after the set of zeros.

The default configuration of Cobalt Strike uses named pipes for the communication between different processes:

The configuration of these named pipes can be changed, but in a lot of cases attackers will just stick to the default settings.

In Volatility you can list the named pipes via the handles command and specify the process PID. Note that the list of named pipes can provide you hints of other machines most likely also affected by the intrusion (for example if the named pipe has references to machine names/IPs for post exploitation or SMB beacons).

As an additional note, the number of characters of the name of the named pipe is a giveaway for what command is being issued. For example mimikatz (8 chars) will have a named pipe name of 8 characters long. Also see the blog of F-Secure Detecting Cobalt Strike Default Modules via Named Pipe Analysis and a list of malleable profiles (including the different pipe names) from Michael Haag.

PowerShell logging is essential to further identify Cobalt Strike activity. Because so many attacks make use of PowerShell in one way or another (not only for Cobalt Strike), it is a treasure cave for doing incident response. Unfortunately PowerShell auditing (logging) is not always enabled in corporate environments (as was the case for the IR for which I did this post).

If you do have PowerShell logging enabled, then look for

Crowdstrike has an overview of PowerShell log observations of Cobalt Strike commands: Getting the Bacon from the Beacon. 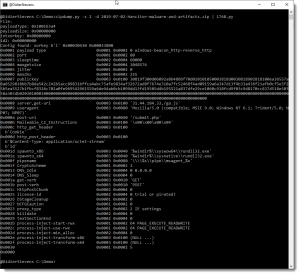 The dump of the configuration file gives you immediate access to the named pipes, the C2 server (name, port and URI) and the HTTP user agent used for beaconing. All this information is something you can use to further identify compromised devices.

There are a couple of Sigma rules that you can use to detect Cobalt Strike :