Your users are the first line of defence against threats, especially for what concerns phishing. One of the ways to get more involvement is offering a simple and easy way to report suspicious messages, such as phishing e-mails. You can do this via a phishing alert button that allows users to notify the helpdesk of a suspicious message. The technology behind such a button is straightforward:

Instead of starting from scratch you can use the -free- Phish Alert Button (PAB) from KnowBe4.

The pipeline to handle phishing e-mail notifications from users is as follows. 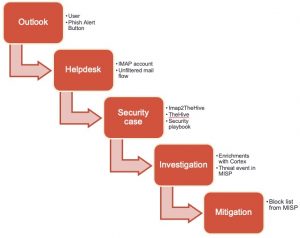 The first step is to create the button. You can use this video as a guide. I did these modifications. 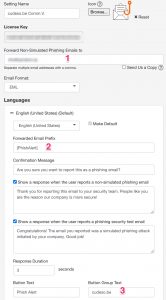 Apart from these settings, there’s really nothing more that you need to configure. If you save your changes you can then download the button as an installable MSI file. After the installation of the MSI and restarting Outlook you’ll notice the button in the Outlook ribbon.

Users can then report a suspicious e-mail by clicking on the button. They are prompted to confirm the action, given a thank you message afterwards and then the e-mail is forwarded to the helpdesk and removed from their inbox.

The IMAP2TheHive tool from Xavier Mertens does the heavy lifting. This tool reads the IMAP folder that receives the phishing notices and then creates individual security cases in TheHive. These changes have been done to the configuration file.

I run the IMAP2TheHive script via cron and it’s executed every 15 minutes. Afterwards you’ll see a new case created in TheHive. The new cases contains a number of tasks, which have been defined in the phishing handling playbook. 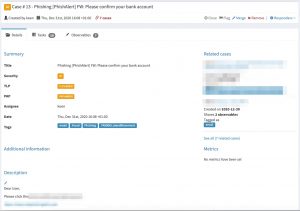 One of the observables in the security case in TheHive contains the original e-mail. This allows the analysts to review for example additional e-mail headers.

The import script automatically extracts useful indicators such as URLs found in the phishing e-mail. You can then use Cortex to verify if these (phishing?) URLs exist with Google SafeBrowsing or if the purpose or goal of these links is known with Virustotal. 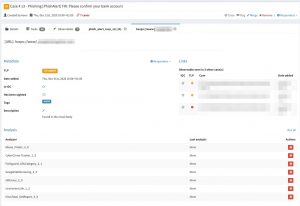 I described in another post how to create a block list from data in MISP, see Feed honeypot data to MISP for blocklist and RPZ creation. The integration of MISP with TheHive is explained in detail in a post from TheHive : TheHive, Cortex and MISP: How They All Fit Together.