Modbus is a serial communication protocol. It is the most widespread used protocol within ICS.

It works in a Master / Slave mode. This means the Master has the pull the information from a Slave at regular times.

Modbus is a clear text protocol with no authentication.

Every Modbus variant has to choose a frame format:

You can have only one Master on a “Modbus” network and maximum 247 slaves, each with a unique slave ID. In the serial world, the devices have to been connected in a daisy-chain manner, not in a star topology.

In TCP we often refer to the Master as the Client and to the Slave as the Server.

I based my previous post with an Intro to PLCs, ICS and SCADA on a Black Hat 2014 presentation by Arnaud Soullié in a Industrial Control Systems : Pentesting PLCs 101. This post is based on the same video, together with some of my findings when I did the labs.

The TCP frame format consists of

A word on Modbus unit devices. In most cases you don’t need a unit id because you already addressed the correct unit via its IP address. In some cases however you will run into a situation where multiple devices are connected to one IP address (for example ‘bridges’). In that case the unit id might have to be set to 255.

The unit id of 0 can be seen as a broadcast address. Messages sent to 0 can be accepted by all slaves. If you setup a Modbus client remember that it can not have unit id 0!

You can use ModbusPal to simulate the behavior of a Modbus slave. It is a Java application that allows you to play with different slaves (registers and coils). You can then query the Modbus instance with MBTGET. MBTGET is a simple modbus/TCP client write in pure Perl.

There are a couple of alternatives that you can use to play with Modbus. For example

For my setup I used ModbusPal (Slave) on a Kali VM host and MBTGET (Master) on a Linux VM host.

The network captures are done with the use of vmnet-sniffer to get the traffic between different virtual machines running on OSX.

Later on you can then read the pcap files with Wireshark. Modbus TCP traffic runs on tcp/502.

First we have to setup ModusPal to emulate a Modbus slave. After downloading ModbusPal you can run it with

Add a slave, edit the slave and add some coils. 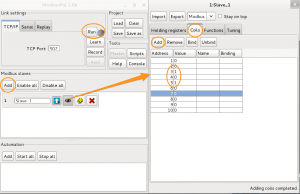 Ideally you also alter the value of some of the coils. Remember these are booleans, so the value is either 0 or 1. Then click Run to start the slave.

Now switch over to your Linux client with MBTGET installed. The usage of MBTGET is fairly easy:

You have to use -r1 to read coils and with -r3 you can read holding registers.

The first traffic capture is querying the coils in our slave. As a reminder, the network captures are done with vmnet-sniffer and then opened in Wireshark. I use this Modbus command

In Wireshark I filter the traffic to Modbus only with

In the network capture you can first observe the TCP 3-way handshake followed by the first Modbus packet.

Let’s have a look at the Modbus packet. Wireshark has a decoder for Modbus (at least for captures done via TCP, for serial captures you have to set mbrtu in the user DLT) which makes it easier to look at the data. The network capture shows that we requested to read 8 bit (the -n 8) from coils (the -r1) in the unit id 1 (-u 1)

The next packet is the Modbus reply packet. In the reply packet you can see that the Transaction Identifier (36710) is the same as in the previous request. This is the way that Modbus synchronizes the communication. The reply also contains the requested function (F1 – read coils) and the unit identifier (1). The most interesting part is the data, or the payload.

The data is 14. This is 14 in hexadecimal. The coil values are booleans or binary values. So we have to convert the 14hex to a binary value.

This binary values corresponds with how we set the coils previously in ModbusPal. The third and fifth registers were set to 1.

For the next capture I set the value for three holding registers. 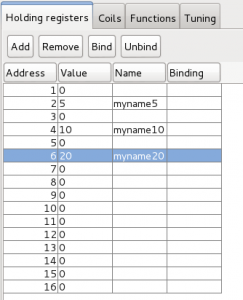 and then query the Slave for its values with

In the traffic capture you can now see that the requested function is Read Holding Registers (F3) with a length of 8. 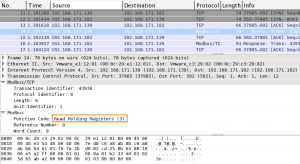 The Modbus reply holds the requested function call (3) together with the results of the 8 (starting from 0) registers. 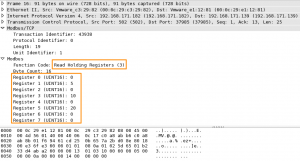 Writing to holding registers in Modbus

Now let’s have a look what happens if we write to a holding register.

The ModbusPal interface will show that the register 9 (mbtget starts counting at 0, ModbusPal at 1) holds the value 333.

The packet capture shows a familiar output. First the 3-way handshake and then a Modbus packet. This packet contains the function request Write Single Register together with the reference number (8) and the payload (data, 014d).

The response packet (verify the sequence number to make sure you are looking at the correct combination of request/response) again contains the requested function (6) together with the submitted payload.

You can search for Modbus devices with nmap. What’s more, there’s a script that gives you more information on the Modbus device.

If you take a look at the source of the script you can see that it tries to discover the available device IDs.

Notice the 0x11. The hex value 0x11 corresponds with 17 decimal. The Modbus function code 17 is a diagnostics function to Report Slave ID. If you open a packet capture from when nmap was running you will notice the same request.

The reply from ModbusPal indicates that this function request is not supported.

The next part of the NSE discovery script sends another request.

Again notice the payload 0x2B. The hex value 0x2B corresponds with 43 decimal. The Modbus function code 43 is also a diagnostics function to Read Device Identification. This is confirmed in the pcap capture.

If you want to practice your skills with reading Modbus PCAP captures then have a look at pcapr.net and query for Modbus.

Modbus TCP traffic is not that hard to read and understand. The biggest challenge that you will probably face is capturing the traffic, especially if it concerns serial communication. Serial Modbus communication is no different than Modbus TCP communication, so once you have the capture and make Wireshark understand the communication it is easy to analyze.

Remember that this is a protocol with little to none security built-in. This makes it easier to capture and read but also more difficult to protect.